Carbon forms more chemical compounds than all other elements combine. It is the building block of life. Soil carbon takes three distinct forms:

Sequestered carbon comprises the fixed carbon plus the total living biomass, however tradable sequestered carbon is likely to be only fixed stable carbon humates and perhaps glomalins. Fossil carbon is the remains of living organisms that have become trapped in geological formations in the form of coal, oil, and natural gas. The by-product of burning these fossil fuels (mainly carbon dioxide) is accumulating in the atmosphere and oceans and causes global warming. HSA believes that all current and legacy emissions from burning fossil fuels, land clearing and the destruction of soil organisms can be potentially absorbed by plants and sequestered either as living carbon or fixed carbon. Soil carbon is roughly 58% of soil organic matter (SOM).

From a scientific point of view there is no difficulty in measuring carbon to a high degree of accuracy on a large scale using remote sensing and ground proofing. Several private companies both here and overseas have developed machinery for doing this, which will become more available once certainty about crediting is established. The issue is to find a practical standardised measuring system that is reliable, cost effective and internationally recognised.

Can Carbon Be Sequestered And Measured In Soil?

Several thousand Australian farmers have already sequestering carbon in their soils, not to gain credits, but to gain the multitude of co-benefits that arise from doing so. These include less input costs, greater soil fertility, nutrient availability, water holding capacity, and the satisfaction of working with nature.

Through understanding nutritional balance and the symbiosis of the animals with plants and soil life we can build carbon in soil of up to 20 tonnes/hectare/year. In Central Western NSW under planned grazing management, additional carbon in soil has been tested at 9 tonnes/hectare/year. 78% or 7 tonnes of this carbon has been tested as held in humus stable carbon deep in the soil. 7 tonnes of carbon (x 3.67 to give CO2 equivalent) equals 25.7 tonnes of CO2/hectare/year sequestered. If this was sold on the international market at conservatively AUD20/tonne, it would be worth $513/ha/yr. 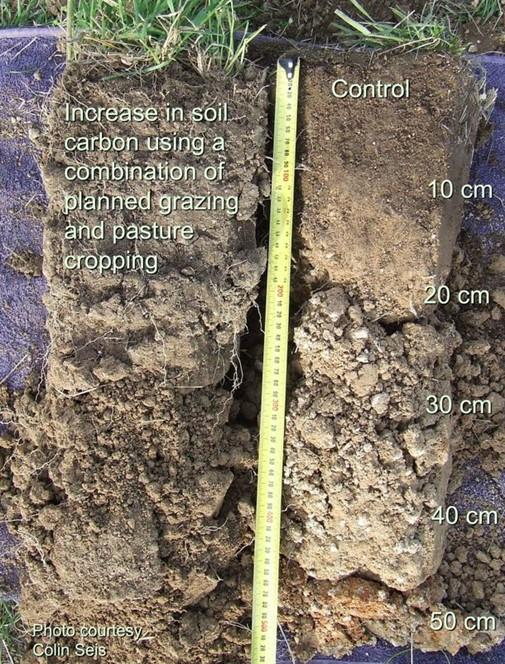